From verbal abuse to physical assaults, healthcare workers on a daily basis face threats to their safety as they care for patients.

"There is a very fundamental problem in U.S. healthcare that very few people speak about, and that's the violence against healthcare workers," said Dr. Tom Mihaljevic, president and CEO of Cleveland Clinic. "Daily, literally daily, we're exposed to violent outbursts, in particular in our emergency rooms."

It's a problem that happens at far greater rates in the healthcare sector than it does in the private sector overall, according to federal data. In fact, between 2002 and 2013, incidents of serious workplace violence were four times more common in healthcare than in private industry on average, according to data from the Occupational Safety and Health Administration. OSHA counts serious workplace violence as incidents requiring days off.

Mihaljevic highlighted the issue in his annual State of the Clinic speech, calling it a "national epidemic." 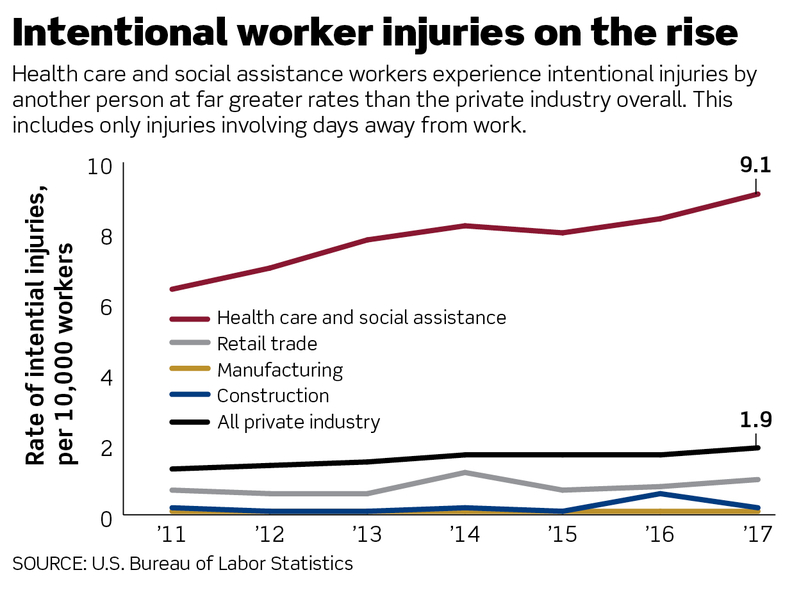 Hospitals have to strike a balance between security concerns and offering easily accessible facilities for patients to seek care and others to visit loved ones.

It's up to the individual organization to strike the right balance for its own situation. What works in a rural hospital may not make sense in an urban setting, said Gerard Castro, project director for patient safety initiatives at The Joint Commission, an independent not-for-profit organization that accredits nearly 21,000 healthcare organizations across the country on a series of quality and safety standards.

"I think the real key here is to talk to the front-line workers — the nurses and the other clinicians that deal with this on a day-to-day basis," Castro said. "The organization has to work with them to come up with a plan to mitigate those risks associated with those problems, and it really takes a comprehensive and systematic approach to that particular issue."

The U.S. Bureau of Labor Statistics tracks incidence rates of nonfatal occupational injuries and illnesses involving days away from work, including "intentional injury by other person." Of the 18,400 such injuries reported in the private industry in 2017, 71% were reported in the healthcare and social assistance sector. And this only includes incidents that involved days away from work.

Surveys and reports estimate that many incidents go unreported.

"If you think about it from the perspective of a nurse that deals with, you know, patients on a day-to-day basis, it's like, how often have they been called names or hit or spat on? And that would fall within the definition of workplace violence," Castro said. "The thing is, healthcare workers, they put up with a lot of stuff and they are extremely resilient. And oftentimes they don't even realize that this is probably something that we should probably report."

In 2018, the clinic confiscated a staggering 30,000 weapons from patients and visitors in its system in the Northeast Ohio region.

That number is largely made up of edged weapons, such as knives, box cutters and razor blades, but also includes things like firearms, screwdrivers, pepper spray, stun guns and more. In the clinic's behavioral health settings, such as Lutheran and Marymount, lighters and matches are also confiscated, said David Easthon, chief of police for Cleveland Clinic.

University Hospitals, which has no metal detectors but plans to pilot one soon, confiscated 298 weapons across its system last year, a number that includes firearms, pepper spray, knives, brass knuckles and box cutters. Most of those were confiscated during patient intake or examination.

And MetroHealth confiscated 59 weapons in 2018, including guns, knives and box cutters. MetroHealth has had a metal detector in its emergency department since 2016.

The metal detectors are just the first line of defense for the clinic. Its police force has exterior perimeter control, people posted in the lobbies and points of egress, and technology to monitor the system. The clinic has implemented panic buttons and provides police escorts for patients and visitors who request it.

The system also has internal education on personal safety and safety awareness; an active program of "See something, hear something, say something"; training on de-escalation and how to address difficult situations; and a workplace violence committee with subcommittees at every hospital.

MetroHealth didn't share specifics of its security measures, but said its system does everything it can to ensure the safety of patients and families.

University Hospitals, too, has trained staff in de-escalation techniques and ways to increase survival, especially in active-shooter situations, said UH chief operating officer Ron Dziedzicki. He highlighted lockdown procedures, emergency preparedness exercises and committees and a mobile app for employees. The app includes a mobile panic button; a "See something, say something" reporting system; and "friend watch" in which a person sets a timer for their walk to the car and if they don't enter a PIN into the app within that time, a designated person and police department are alerted.

UH is working on implementing a system that will alert staff to patients who were violent or angry at a previous visit to the system. It's also planning to implement a program currently in place at Rainbow Babies and Children's Hospital and UH MacDonald Women's Hospital in which visitors check in and are issued a badge, so staff who see someone without a badge can potentially report it.

"I don't think hospitals are any different than churches or malls or movie theaters — except for hospitals, we are a provider of care. We save lives," Dziedzicki said. "So we have to balance the need to be able to have rapid access to care against that balance of safety for employees."