Seeing lots of patients with heart and respiratory disease, Geisinger Jersey Shore (Pa.) Hospital has hired a health coach to work with patients on tobacco cessation. It also just added a care manager in the emergency department to help people avoid having to come to the ED.

And the 25-bed critical-access hospital in rural central Pennsylvania has shifted its clinical dietitian from heading food services to training patients with diabetes and other chronic conditions how to eat better.

It's also developing telehealth access to pulmonologists and cardiologists for the 140,000 people living in its two-county service area.

All that was made possible by Pennsylvania's recent launch of a global budget payment system for rural hospitals. The program pays the hospitals a fixed monthly total and allows them to use the money how they think best serves their community.

The Pennsylvania Rural Health Model is a radical experiment to help rural hospitals transform into more financially viable organizations that redesign their services to focus on the best ways to keep their populations healthy. That could eventually involve some hospitals closing their inpatient units and shifting to outpatient, emergency and behavioral health services. 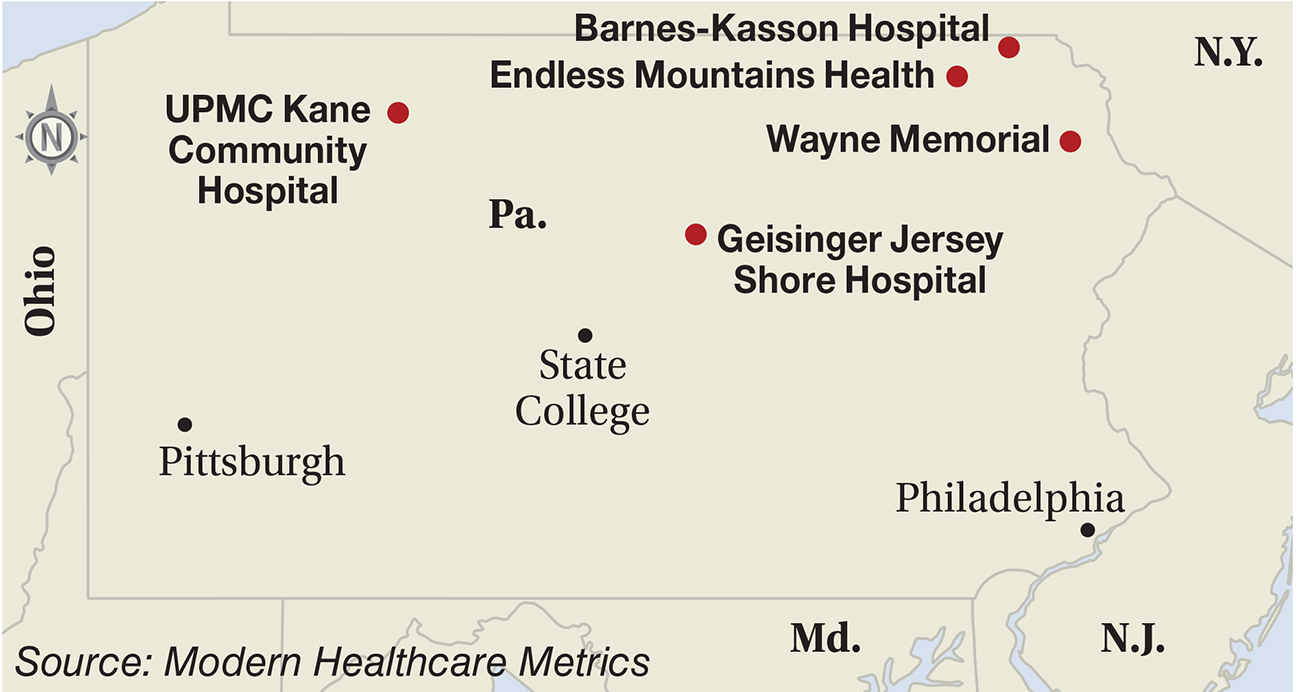 Medicare, Medicaid and four private insurers—Gateway Health Plan, Geisinger Health Plan, Highmark Blue Cross and Blue Shield and UPMC Health Plan—are participating, with more expected to join in the coming months. The private plans will not be required to publicly disclose their payment rates and the state won't set the rates; in Maryland, which has an all-payer, global budget system, the state sets rates and they're publicly disclosed.

The global budget developed for each hospital is based on historical net revenue, considering either the average of the past three years or the most recent fiscal year, whichever is higher. The hospitals and payers will continue to adjudicate claims in order to track how the global budget payments are working.

As part of the five-year Medicare demonstration program, the Center for Medicare and Medicaid Innovation kicked in $25 million to establish a Rural Health Redesign Center to support the hospitals' services and operations transformation.

Nearly 100 rural hospitals have closed since 2010, according to the University of North Carolina's Sheps Center for Health Services Research. More than half of Pennsylvania's rural facilities reported negative operating margins in 2017, according to Modern Healthcare Metrics. Experts say global budgeting is one promising way to help them adapt and survive.

Some experts see this approach as one of the best ways to align payment with delivery of more cost-effective services.

"With a global budget, hospitals are not relying on illness to generate revenue and profit," said Dr. Anand Parekh, chief medical adviser for the Bipartisan Policy Center in Washington, which issued a report last year on rural healthcare reform. "Now they have a pot of money they can use to focus on keeping people healthy."

State officials and rural hospital leaders across the country are closely watching the experiment.

"It's a long-term strategy," said Tammy Anderer, CEO at Geisinger Jersey Shore Hospital. "It could make a big difference today for an individual patient, but for the larger population it will take time."

The CMS presented the concept of global budgeting to dozens of other states. The American Hospital Association, which supports the demonstration, predicts the innovation center may expand it to other states within the next year.

A 2017 report by RTI International found that under Maryland's unique global budget model—which includes all hospitals and payers and has been in effect since 2014—average monthly hospital spending per beneficiary grew more slowly than before the model was implemented. That occurred without adverse financial impacts on hospitals or shifting costs to other parts of the healthcare system.

"The incentives to turn the hospitals more toward population health and keeping patients out of the hospital will take some time," said Joanna Hiatt Kim, vice president for payment policy at the American Hospital Association. "Not everything works perfectly, and there will be experimentation. Plus, every hospital is at a different point in the transformation process."

Hospitals are deeply entrenched in the fee-for-service mindset, and it will take three or four years for them to make the paradigm shift to a population health approach, said Dr. Lauren Hughes, former deputy secretary for innovation at the Pennsylvania Department of Health.

The program encourages hospitals to reach outside their walls and collaborate with social service agencies, businesses and local government officials to establish a wide range of services to improve the social determinants of health. Some rural hospitals already have built such relationships, Hughes said.

"What we've learned about this work is it's incredibly tailored for each hospital," she said. "In some hospitals, the idea of screening patients for social determinants of health is a brand-new concept, while others don't need as much help."

Geisinger Jersey Shore, whose parent organization has considerable experience with population health initiatives, plans to leverage community-based services as much as possible to address broader community problems such as food insecurity.

Karen Murphy, chief innovation officer for the Geisinger system, helped develop the rural health global budgeting demonstration while working as Pennsylvania's health secretary. Murphy said the Jersey Shores facility will provide some of these services itself, and in other cases help fund and organize services provided by others.

"When you are really dependent on inpatient volume, it's hard for rural hospitals to do these things because they don't have the profit margin," Murphy said. "The whole idea of a global budget is to free them up to be more focused on health."