The Philadelphia-based academic health system merged with Magee Rehabilitation last year and is sifting through its portfolio of inpatient rehabilitation facilities to determine which are redundant and how to best leverage the additional capacity Magee provided.

Jefferson Health has nearly two dozen rehab sites scattered throughout Pennsylvania and a few in New Jersey, some of which have only a few beds.

“Some small inpatient rehab units don’t make sense from a quality standpoint,” said Dr. Bruce Meyer, president of Jefferson Health. “We are going to close some and move some to Magee, but not every one because that can create a hardship for families who would have to travel farther to get someone home.”

This process is playing out across the country. Consolidation and increased competition have resulted in duplicative services, sometimes within a couple of blocks. Executives need to weigh quality, financial viability, market competition and community access as they debate rolling up certain business lines. Without the proper due diligence and outreach, these decisions—or lack thereof—can have damaging consequences.

“If I consolidate obstetrics services and make a pregnant woman ride three buses to get prenatal care or deliver a baby, whatever financial benefit I get from consolidating is creating an immoral situation for the patient,” Meyer said. “That is not acceptable.” 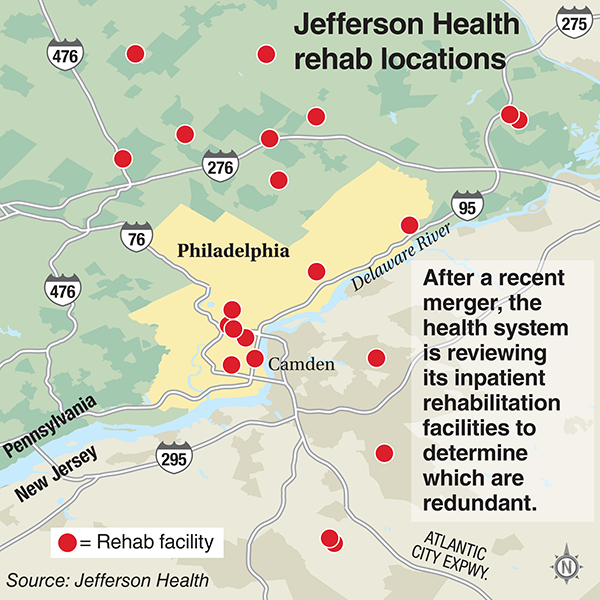 For each service line rationalization, Jefferson creates a business plan designed around its regional referral network rather than the traditional hub-and-spoke model. It looks at the potential value if it consolidates a service. Sometimes things that are seemingly intuitive don’t turn out as expected because capital investments or their payback time line can be prohibitive, Meyer said, noting that services related to pregnant mothers suffering from addiction, care for refugees and other underserved communities are not about margin.

The quality component can fluctuate based on volume—typically more cases translate to proficiency, Meyer said.

Jefferson assesses the impact on access, determining how much longer a person would have to travel to the consolidated center during different hours of the day. This analysis carries more weight as awareness of social determinants of health grows. Similarly, Jefferson measures employees’ commutes, if the bigger facility has the capacity to handle the additional volume and if there are safety risks when transporting patients.

The academic health system also factors in the effect on its residents and medical students to ensure they still have the same educational opportunities and exposure.

But when it comes to quality, sometimes sacrifices have to be made by staff or students, Meyer said.

“We can’t make everyone happy; there is no perfect answer,” he said. “We can’t be provider-centric, we have to figure out the best way to create optimal outcomes for families.”

Not every system is going to have the same playbook. It will vary depending on the system’s infrastructure, patient mix and other elements. But service line rationalization is inevitable, particularly as operating margins wane, consumers decry overutilization and high costs, and skeptics dismiss consolidation’s purported efficiencies, experts said.

In areas where Bon Secours Mercy is the sole provider, it offers a wider array of services and supplements those with telehealth and partnerships with other providers, Cannady said. It is more selective in more competitive markets.

Nearly every board is mulling a five- to 10-year service-rationalization plan, said Paul Keckley, an industry consultant and managing editor of the Keckley Report. A lot of it has to do with how does a system consolidate its tertiary and quaternary settings, beef up primary care and invest in digital services.

“About 18% of the hospitals in the country are at or near insolvency, so they have to make some changes,” Keckley said, citing a 2018 Morgan Stanley analysis that found that 1,050 out of 6,000 hospitals studied were on weak financial footing.

Mayo executives said it was no longer feasible to duplicate some of its most complex and expensive healthcare services in neighboring communities given the financial struggles community providers face as well as ongoing labor shortages. Former CEO Dr. John Noseworthy admitted that Mayo didn’t adequately explain why the change was happening.

But Albert Lea residents said the area economy would not be able to sustain the cuts from one of its biggest employers. Quality of life and healthcare have suffered, community members argued.

The potential backlash from the community and within the organization are why many health systems end up not consolidating service lines, Keckley said. For every hospital or health system that has done it, there are five others that need to but haven’t, he said, adding the caveat that investor-owned hospital chains do it routinely.

“There is a huge underestimation in the degree of community support that has to be built when you take a program out of the community,” he said.

Redundancies are typically left in place after a merger, often due to pushback from staff, said Warren Skea, a managing director at Navigant. Then the organizations lose out on the expected synergies, and it is deemed a failed attempt.

Investor-owned hospital chain HCA Healthcare declined an interview but pointed to its first-quarter earnings call for details on service-line management. In it, CEO Samuel Hazen said its cardiac volumes were up 3%, electrophysiology was up 5% and cardiovascular surgeries were up 4%. As HCA builds out service line capability across the system, that yields more revenue per patient, he said.

“Those things still have room to grow,” he said on the call. “And as we see continued momentum in the markets with job growth and strong economies, we think that portends reasonably well for us over the course of 2019.”

HCA has a service-line team that supports physician recruitment, program development, technology deployment and patient navigation that has boosted those volumes, he added.

Generally, lower-margin business like obstetrics, behavioral health and primary care seem more vulnerable. Obstetrics, for instance, has been declining throughout the country—about half of rural counties lack the capacity, according to a 2017 study published in Health Affairs.

Providers have to think about their affiliated network when it comes to obstetrics, pediatrics, mental health and other services that have traditionally been loss leaders, Skea said. The University of Alabama at Birmingham Health System, for instance, has shared some of its specialists, administrative capacity and telehealth solutions with struggling rural hospitals.

“Some of those things can be done in smaller, lower-cost settings,” he said. “Systems need to act like systems rather than an affiliation of competing entities.”

The industry is getting close to an imbalance of services, Keckley said. There are acute shortages and a lack of capital for certain services in rural and nongrowth markets that do not seem to be abating, he said.

“A lot of systems view this as doubling down on their core business, especially academics,” he said. “But that exposes them to private equity and other aggregators of community-based services. If employers decide to push risk on primary-care groups through some capitated model, that is a fault line for those doubling down on tertiary and quaternary services.”

High-cost service lines create an opportunity for an independent physician group like Kingsport, Tenn.-based Holston Medical Group, CEO Dr. Scott Fowler said. If it costs about $45,000 to perform a total hip replacement in a hospital, Holston can do it for $20,000.

“Service lines that are overutilized in high-cost systems are ones we want to control in our value piece,” Fowler said. “We lose control when we go into models driven by profit rather than value.”

Obstetrics is a long-term investment, even if it loses money, he said. It’s important to offer those services since women are the primary healthcare decisionmakers in most families, Fowler said.

“If the viability of your organization is dependent on cutting service lines that don’t make money, you need to ask yourself if it is better to be here for some things or not to be here for anything,” Jefferson’s Meyer said. “These are hard decisions that make you uncomfortable. You lose a lot of sleep before and after the decision.”

HCA’s commercial obstetrics volume was up about 6% in the first quarter of this year while its Medicaid volume dropped, which flattened admissions for the quarter. Still, the hospital chain has tried to become a destination for women’s services, Hazen said.

“That’s working for us in markets where we’ve made those investments. And we’ll continue to look at, again, transporting that idea more broadly, so that we can pick up market share,” he said on the earnings call.

Correction: An earlier version of this story misstated where Holston Medical Group is based. This error has been corrected.

“If the viability of your organization is dependent on cutting service lines that don’t make money, you need to ask yourself if it is better to be here for some things or not to be here for anything.”
Dr. Scott Fowler,  CEO of  Holston Medical Group

Providers face several trouble spots as they analyze their operations, including the Medicare physician fee schedule and the labor pipeline.

The unbalanced fee schedule has helped create an income gap that has led to a shortage of primary-care physicians when primary care is the cornerstone of value-based care.

When Congress shifted pay models from individual physicians’ historical charges to the “relative values” of services, that translated to higher reimbursement for new services and a significant increase in the volume of expensive procedures. This has widened the income gap between primary-care physicians and specialists, causing more students to pursue the latter.

“The financials drive these decisions,” he said. “We have seen total consolidation around big cost centers that can subsidize doctors for overutilizing high-cost models.” That will be the case until value-based care is mandated, Fowler added.

If health systems have fewer family doctors for their primary-care networks, this will skew their service lines. That’s why organizations partner with or acquire medical schools or other educational organizations, like HCA’s acquisition of the Galen College of Nursing.

Doctors get trained in a hospital, which in a fee-for-service world gets more value from an orthopedic than a primary-care physician, Fowler said.

“If I try to sell them on the ideology or future prospects, it would be difficult for us to get someone who wants to make $700,000 being an orthopedist,” he said. “The underpayment of family doctors occurred because they are not worth very much in a fee-for-service world.”

Change is inevitable, and some systems will continue to be more proactive than others. It will be tough to manage job cuts and restructuring.
Still, providers will need to adapt or live with the consequences, Meyer said.

“We have to find ways to take waste, administrative cost and duplication out of the system,” he said. “But as that value gets monetized in healthcare, we also have to find a way to get a piece of that monetization because otherwise we will struggle to remain viable.”